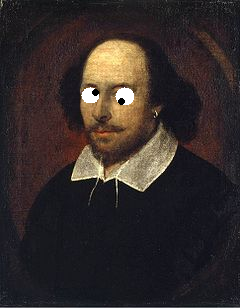 If you read enough stuff by a given writer, sooner or later you are going to read Opinions, and most of the time these will be Opinions About Things In Which The Writer Is Not An Expert. This is natural, because writers are people too (no, honest!) and people like spouting off their Opinions.

This is also very dangerous, because you’ve got someone whose entire job is to make things sound believable, blabbering authoritatively about stuff they don’t really understand.

No matter the topic – religion, philosophy, politics, lepidopterology – you’re going to get a well-reasoned, well-structured, polished, coherent, grammatically correct argument. And then, if you’re not careful, you can find yourself nodding along and thinking “Hey, that makes sense, we should employ genetically modified marmosets to direct air traffic.” And you have to snap out of it and remind yourself that Writers Don’t Actually Know Anything.

“Okay,” says you, “but there is one thing writers actually know about: writing. Surely I can trust their opinions on writing?”

Ah, to be young. I remember the days when I myself was a naive lad of but 25 years.

I got a book one time – I’ve long since forgotten the title – that was nothing but interviews with writers, asking about their process and their thoughts on the craft. Every writer described their own process – throwing out words like “of course” and “naturally” to make their experience sound universal and obvious – and every process was totally different from all the others.

Probably you’ve heard this before, that every writer’s process is different, that you should do what works for you. But the less-publicized corollary is that most writers don’t actually understand writing, they only understand the writing process that works for them.

This is part of the reason you get so much conflicting advice. Because even though writers know that they’re all different and readers are all different, even though they read other writers’ blogs and think about other ways of doing things, fundamentally (and naturally) they are still rooted in what works for them. And a lot of writers understand this, and that’s why the smart ones put disclaimers like “This has worked for me, but your mileage may vary.” Because they know that when one person’s driving a Hummer and another has a Harley, mileage will indeed vary.

Me, I have a silver four-cylinder base-model 2006 Honda Accord, and I include myself very much in the “writers who don’t understand writing” category. Which is why I try to be careful about the advice I give here.

Because I Don’t Actually Know Anything.

I mean, uh. Thank you. I really appreciate it.