Why Pepper Spraying Kids in the Face is a Bad Idea

In case you haven’t heard, some seriously bad shit is going down at the University of California-Davis.

The video above is more than eight minutes long, but the first 30 seconds will show you all you need to see. A line of student protesters is seated peacefully on the ground on the campus of their own university. A police officer walks up and down the line, deliberately and repeatedly dousing the crowd with pepper spray. This happened on Friday.

In the wake of this fiasco, it seems like all the right things are happening. The campus chancellor has apologized. The university president is taking steps to ensure this doesn’t happen again. The officers involved are being investigated for disciplinary action. The press has blown the whole thing wide open. The students are right back in the same place, protesting again. All this is as it should be.

The absurdity of a police action like this is mind-boggling. Forget for a moment the basic and obvious ethics of using chemical weapons on someone for sitting on the ground. Forget the massive PR debacle that anyone could have predicted. Let’s focus for a minute on the biggest reason this attack doesn’t make sense:

You’re on the same side.

In a democracy, police and protesters are working toward the same goal. Both roles exist to serve the people, and both roles are absolutely essential. If either ceases to function, the entire system crumbles. 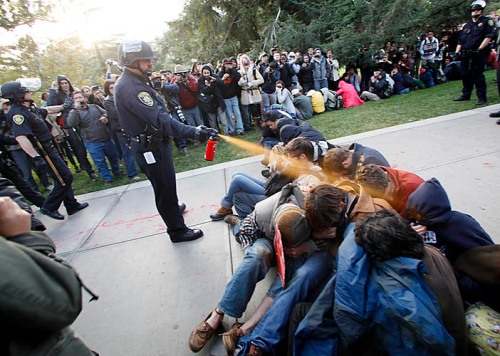 We see the most extreme manifestation of this Government vs. People mentality happening all around the world. Syria’s dictator has already killed four thousand demonstrators, with no sign of stopping. Egyptian protesters are gearing up for a second revolution, after their first one earlier this year didn’t bring about the changes they needed. In Burma, things are so bad that when an opposition leader runs for Parliament, it’s international news.

Obviously the situation in all three of those countries is far, far worse than anything going on at UC Davis right now. But that’s where the path leads, if left unchecked.

If necessary, I’ll take to the streets too. I’ve done it before.