Christmas Island (shown above) belongs to Australia, but it lies over a thousand miles from the Australian coastline. It pretty much does its own thing: it has its own flag, its own capital, its own Internet top-level domain (.cx).

It even has its own private war going on. Not a war of human beings, but a war all the same.

The island is home to millions upon millions of red crabs. Every November, they undertake a mass exodus from their forest burrows down to the ocean to mate. They’ve made this journey as long as anyone can remember.

But sometime around 1920, things changed.

Nobody knows exactly where they came from or how they got to Christmas Island, but one thing is certain: the yellow crazy ants are here to stay. 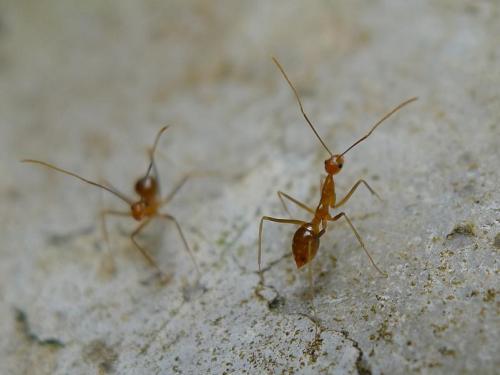 The yellow crazy ants are a classic invasive species. Their territory now includes more than a third of the island’s area, and the ants defend their territory. These days, when the crabs migrate, they crawl over ant nests – and the ants spray formic acid on the intruders, often killing the crabs in a matter of hours. Estimates of red crab casualties in recent years number in the tens of millions.

The ants are called “crazy” because of the erratic way they move, but that’s not the craziest thing about them.

Christmas Island is now home to thousands of yellow crazy ant colonies, but the colonies don’t fight with each other. They don’t compete. They cooperate. They share resources.

The whole island has become a single supercolony, with thousands and thousands of queens.

That’s what the crabs are up against. And nobody knows how it’s going to turn out.

Thanks to Judith Schalansky and her Atlas of Remote Islands for cluing me in to this drama. The book is full of wild stories in far-out places.

What kind of strange things have you heard about lately?

7 responses to “War on Christmas Island”