The captain’s men set their hands on their swords as the golem boomed a reply. The situation was spiraling rapidly. She had to do something quickly – but what? 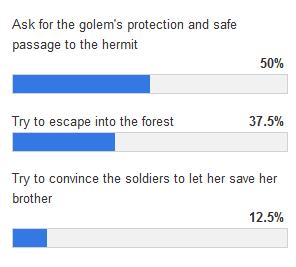 “Golem!” shouted Dyriel, and the creature fell silent to let her speak. “Golem, I beg asylum! Grant me your protection and give me safe passage to the hermit Amagoso, and I swear I’ll disturb no one in this forest. And I swear likewise,” – here she tried her best duchess stare on the captain – “that I will return to the castle this very day, of my own accord.”

The captain’s face turned purple with rage. “You dare give your allegiance to a foreign power, against your own father?”

“My allegiance is to my family!” she yelled. “No one else has lifted a finger to save my brother, so I’ll do what I have to!”

“Men died defending your brother on the field of – ”

The golem smashed his stone palms together with the sound of sudden lightning. Not only Dyriel and the captain, but all the wide forest fell silent: the songs of sparrows, the endless drone of insects. The horses, well-trained, did not rear up or panic, but several backed away uneasily.

“No one will fight in my forest today,” said the golem. “This girl will return to Glenhaven Castle in peace. But first, I will take her to see the hermit. It will be a short journey.”

The golem’s legs shrank, grew shorter, till his massive gray hands brushed the dirt. Except the hands were less massive now, losing their granite texture. The armor melted away, the eyes became less perfectly round, the face softened and took on the appearance of flesh. In a matter of moments, the giant had transformed into an old woman in a crude burlap dress, her white hair pulled back in a tight bun, her wrinkled face stern but not unkind.

The woman turned to Dyriel, whose mouth was still open in astonishment. “I am Mafti Amagoso Lecruscio,” said the woman, “and I can rescue your brother.” She glanced back to the soldiers, wispy eyebrows upraised. “That is, if these fine young gentlemen can spare a few more minutes of their time, for the sake of Lord Danson.”

Their captain frowned, but nodded mutely, seemingly impressed by this display.

Dyriel fell to her knees, nearly weeping in relief. “Thank you, Amagoso!”

“Oh?” A wry smile crinkled the edges of the old woman’s mouth. “I haven’t done anything yet, child. I said I can save your brother. But I’ve yet to hear what you might offer me in return.”

“What…” Dyriel’s heart faltered. “What do you want?”

“I want nothing, child. But a spell like this won’t run on good wishes and pixie dust.”

Her smile deepened into something unreadable. “You must offer me something in exchange for the laws of the universe that I am about to break.”

This entry was posted in Uncategorized and tagged Fiction, Forty-Minute Story. Bookmark the permalink.