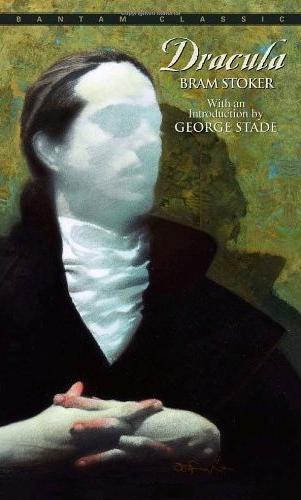 Bram Stoker’s Dracula is, of course, the quintessential vampire story, the grandaddy that spawned a genre still alive and kicking today. Stoker’s novel, published in 1897, didn’t invent the idea of the vampire – that was a much older myth – but it became the defining portrait of the creature for generations to come.

Reading it in 2012, therefore, is interesting for several reasons.

First, because it strips away a century of accumulated embellishment and returns you to the core tale. Most of the popular image of Dracula (tall, aristocratic, pale and creepy, East European accent) is accurate, but there are odd disparities. For instance: he has a mustache. This is so at odds with our modern perception that it isn’t even included on the cover, but it’s right there in the text. Dracula also has a host of supernatural abilities, including the ability to turn into a wolf or a large dog – which, today, would be more associated with werewolves, who are considered vampires’ enemies.

It’s interesting, too, because the novel presupposes a reader who no longer exists today: somebody who’s never heard of the Count. It’s hard to keep from laughing throughout the novel’s first fifty pages, as Jonathan Harker keeps thinking there’s something not quite right about this charming Count Dracula fellow. He lives alone in a castle, he only comes out at night, never eats, doesn’t have a reflection, is obsessed with blood…what could it be?

Putting aside the book’s status as a cultural icon, the novel itself holds up quite well even after a hundred years. It’s told in the form of diary entries, letters, telegrams, and newspaper clippings, which lends an air of verisimilitude to the work of fantasy. The first part – with Jonathan Harker traveling to Castle Dracula in Transylvania as the Count’s guest – is excellent, full of shadow and portent. Wolves – which the Count calls “the children of the night” – howl outside, and Harker becomes increasingly frantic as he realizes he’s trapped.

Dracula then travels to London, where the supply of blood is more plentiful. Here we acquire an ensemble cast of characters: Mina, Jonathan’s girlfriend; Lucy, Dracula’s first English victim; a handful of other, largely interchangeable, dudes who are all in love with Lucy; and of course, Professor Abraham Van Helsing, the only other character in the book that anyone remembers.

The London section of the book is also pretty good, with suspicions gradually increasing as nocturnal hijinx accumulate. Eventually, Van Helsing convinces everyone that Dracula’s gotta go, and the whole group works together to hunt him down. They eventually drive him back to Transylvania, where they finally (spoiler alert) kill him.

This final section of the book, which spans over a hundred pages, is also the weakest. The mystery is gone, replaced with the fairly complex mechanics of supernatural combat. Dracula himself spends most of his time not only offstage, but asleep in a box that other people are carting around for him. So, basically, they’re hunting a box. The climactic final scene? They open the box, find Dracula still comatose, and stab him. There’s a little more drama than that, but not much.

Still, a very solid read overall. For a book that’s over 400 pages, I tore through it pretty quick. Recommended to anyone who likes vampires or Victorian angst.