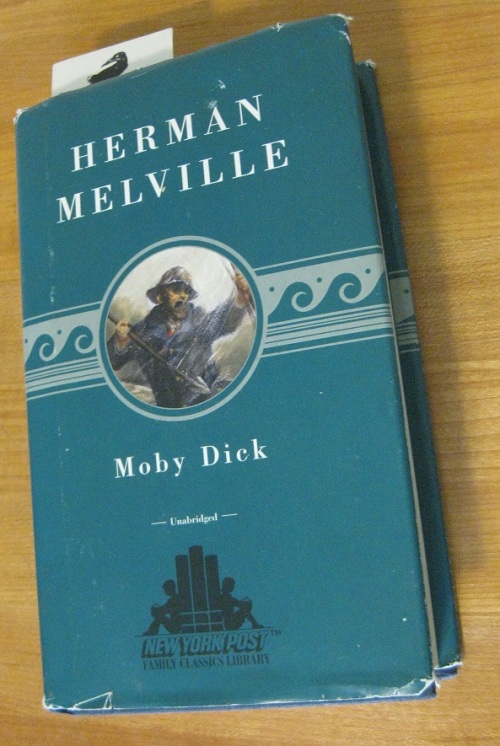 Moby-Dick, by Herman Melville, was published in 1851. It received a few scathing reviews and was quickly forgotten. It wasn’t until the 1920s, during the so-called Melville Revival, that the novel was “discovered” as a major literary work, and college professors have been calling it a masterpiece ever since.

I’m reading it for the first time now, about a quarter of the way done. So far, I think the scorn and the praise both make perfect sense.

Moby-Dick is not an adventure story in the usual way. It is an adventure, but the text doesn’t hold to the main avenue of the plot. It wanders down meandering alleys, pointing out odd landmarks and exploring the districts where tourists don’t go. Melville shows us his characters, but he also shows us religion, philosophy, history, biology, the ocean and all it’s about and all it represents.

As a result, your enjoyment of the novel depends largely on how much you like (or tolerate) these excursions from the main narrative. Personally, I love philosophy and religious debates and poetic musings on the waves, so I’m liking it pretty well so far. (Again, only 25% done.) But if you just want to see what happens with Captain Ahab and his white whale, and if you see the rest of it as excess baggage, then you’re in for a long ride.

One huge factor is the expectations game. Several of my friends had already warned me away from the book, citing these hardships. I knew its reputation as a thick, difficult masterpiece. I knew what I was in for. That made the whole thing much more enjoyable than if I’d gone in looking for a brisk plot and gotten blindsided.

That said, the book isn’t nearly as difficult as I feared. The pleasure-to-pain ratio is much higher than, say, Joyce’s Ulysses or (God help us) Finnegans Wake. Despite all his excursions and wanderings, Melville is an able and amiable tour guide. You may not go where you expected, but you won’t get lost.

There are some things I don’t like. The main character, Ishmael, who narrates the story in first person, is probably my biggest gripe. As a window into the world of Moby-Dick, he’s fine, but as a character in his own right, he’s pretty bland. I don’t have much of a sense of who he is. I don’t love him or hate him. He’s just kind of there, which is a sharp contrast to the strongly drawn portraits of Ahab, Queequeg, and the rest.

I also didn’t much care for the infamous chapters devoted to detailed breakdowns of whale biology and taxonomy. The problem wasn’t, as I expected, the dryness or the apparent irrelevance; I actually like reading about whales for their own sake, so I didn’t mind that. The problem was the style. Melville writes:

It is some systematized exhibition of the whale in his broad genera, that I would now fain put before you. Yet is it no easy task. The classification of the constituents of a chaos, nothing less is here essayed…

Look, I don’t care if this chapter is disconnected from the plot. That’s fine. But if you’re going to be irrelevant, get on with it.

But the novel’s peaks more than compensate for the valleys.

In the scene I’m reading now, Captain Ahab reveals to his crew that this is no ordinary whaling trip. He’s got his eye on one prize in particular, the creature that took his leg. His first mate, Starbuck, reprimands him for seeking revenge on a mere animal:

“Vengeance on a dumb brute!” cried Starbuck, “that simply smote thee from blindest instinct! Madness! To be enraged with a dumb thing, Captain Ahab, seems blasphemous.”

“[…] All visible objects, man, are but as pasteboard masks. But in each event—in the living act, the undoubted deed—there, some unknown but still reasoning thing puts forth the mouldings of its features from behind the unreasoning mask. If man will strike, strike through the mask! How can the prisoner reach outside except by thrusting through the wall? To me, the white whale is that wall, shoved near to me. Sometimes I think there’s naught beyond. But ’tis enough. He tasks me; he heaps me; I see in him outrageous strength, with an inscrutable malice sinewing it. That inscrutable thing is chiefly what I hate; and be the white whale agent, or be the white whale principal, I will wreak that hate upon him. Talk not to me of blasphemy, man; I’d strike the sun if it insulted me. […]”

For an answer like that, yes indeed, I will keep reading.

10 responses to “On Reading Moby-Dick”