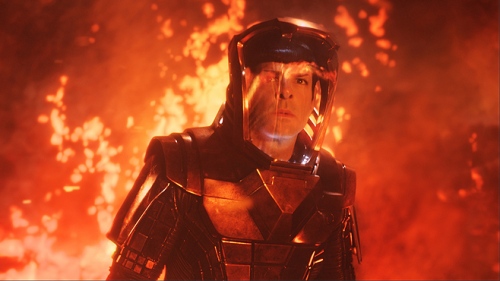 I’m going to say a lot of good things about this movie, but let’s get one thing out of the way first. I don’t know who’s been picking titles for Star Trek movies lately, but they are bad at their job and they should feel sad.

What the Star Trek Into Darkness title lacks in ambiguity, it makes up for in utter retardedness. Darkness might actually be the single most overused, clichéd metaphor of all time. The title suggests that our heroes are in for a supreme struggle, which might be more exciting if it weren’t already the plot of every single story since Gilgamesh.

Ahem. Okay, wow. I didn’t realize I had that much title anger. Breathe, Brian.

Anyway: nomenclature aside, the new Trek is excellent. Same director, actors, and style as Star Trek 11: The Search for a Subtitle, but a general step up in both storytelling and adrenaline. If you liked the last one, you’ll like this one too.

I’ll admit, the trailer had me worried. Exciting music aside, it looked like a mess of action and CG with no discernible storyline. I’m happy to report that there is indeed a plot, and even if it isn’t the greatest script in the franchise, it gets the job done.

Besides, Star Trek has never been about the plot. It’s about the characters, and the hard decisions they make. And fortunately, the characters in Darkness are excellent.

Kirk is bold, brash, decisive, almost (but never quite) to the point of absurdity. Spock outshines even the captain in the titular Darkness: his struggle between Vulcan control and human passion is intense and utterly believable. Scotty is funny without being a joke, and even Sulu gets in some good scenes. Only Bones seemed disappointing, though I can’t really say why. All the crew felt new and old at once, in the best possible way.

And then there’s this guy: 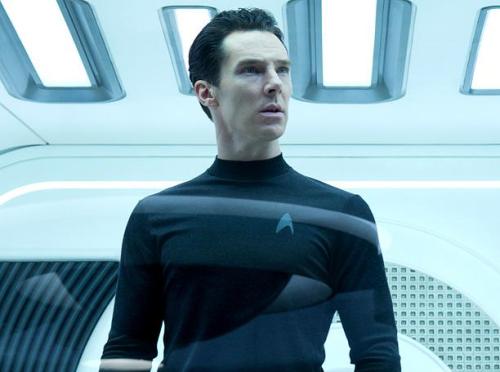 “Into Darkness” is also the title of my semi-autobiographical indie goth rock album.

As I’m staying spoiler-free, I won’t tell you who he really is, but it’s a cool moment when you find out. Regardless, the pale dark dude is eminently menacing, with a sweet deep voice that Christian Bale’s Batman can only dream about. A starship duel has never felt more like a knife fight than with this guy at the helm.

The movie is awfully heavy on CG and action. Personally I would’ve toned it down a little. Not that it made for a bad movie, but it didn’t feel as much like a Star Trek movie. But that may be just the grumpy old man in me. J.J. Abrams, get off my lawn!

Besides, if you had any doubt this was a Star Trek movie, there’s a scene near the end that will erase your worries. For newbie fans, it’s merely an excellent scene. For veteran Trekkies, it borders on sublime.

I liked Into Darkness a lot, and if its Rotten Tomatoes score is any indication, I’m not alone.

If you’re on the fence about whether to watch this one, my advice is: boldly go.