Bill Nye, Brent Spiner, and MIT’s professor of planetary science are pumped about it. It’s being launched by the founder of the X Prize and a former NASA engineer. I’m talking about the ARKYD, the world’s first crowd-funded, publicly interactive space telescope. If you like the idea of a telescope that sixth graders, astronomers, and you can point at any corner of the sky – if you think space exploration should be exciting again – then this is a project you don’t want to miss.

If you haven’t seen it, Wikipedia’s “nearby” feature is pretty sweet. It looks up articles for places that are near you, physically, as in latitude and longitude. To see it in action, you’ll have to allow your browser to send Wikipedia your location information.

In 1968, a girl wrote a letter to Spock and mailed it to a teen magazine:

Dear Mr. Spock,
…I know that you are half Vulcan and half human and you have suffered because of this. My mother is Negro and my father is white and I am told this makes me a half-breed. In some ways I am persecuted even more than the Negro. The Negroes don’t like me because I don’t look like them. The white kids don’t like me because I don’t exactly look like one of them either. I guess I’ll never have any friends.
F.C.
Los Angeles, Calif.

Leonard Nimoy took the time to reply to her personally. His response said, in part:

[Spock] replaced the idea of wanting to be liked with the idea of becoming accomplished…He said to himself: ‘…I will develop myself to such a point of excellence, intelligence and brilliance that I can see through any problem and deal with any crisis. I will become such a master of my own abilities and career that there will be a place for me. People of all races will need me and not be able to do without me.’

It’s worth reading his full response. 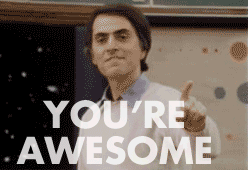 Carl Sagan says you’re awesome, and who am I to disagree? Animated gifs don’t come much better than this.

This may be the funniest thing I’ve seen all week.

The Onion reports on Obama’s ongoing Twitter feud with the Audubon Society. 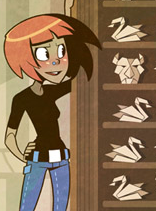 Two Guys and Guy has an important lesson for writers about how to handle rejection letters.

One response to “Friday Links”