All your classier caves come equipped with doors.

Sixty miles northwest of Columbus, surrounded by endless acres of corn, lie the Ohio Caverns. Betsy and I drove there Saturday to check them out.

The caverns are 54° F all year long, though you end up a bit colder than that, on account of the water that drips from the ceiling onto your hands, your head, and down the back of your shirt. Still, it was a welcome change from the summer heat.

This particular cave system was formed by an underground river, carving a path through the limestone over thousands of years. The stalactites (“hanging tight to the ceiling”) and stalagmites (which “might someday reach the ceiling”) are simply the accumulated remains of water dripping in the same spot for millennia.

Apparently, the caverns were discovered in 1897 when a 17-year-old farm worker noticed that the water would pool up in a certain area of the land, then drain away. He wanted to find out where it went.

Now we know. The process of excavation took decades, but I’d say it was worth it. 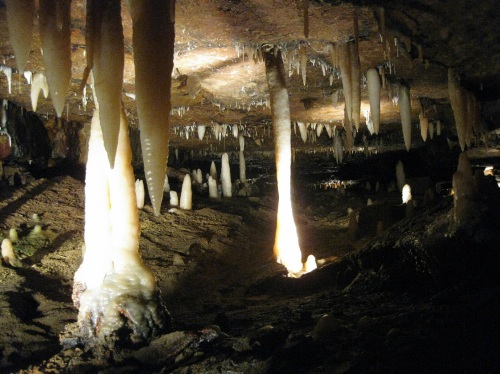 What do we call it when a stalactite and stalagmite merge? We call ’em columns. Ha! Call ’em columns. omg do you get it (Our tour guide actually made this joke. I liked it.)

It’s a strange feeling, walking on the raw rock under the surface of the earth. You find yourself in the presence of ancient, alien structures, the result of processes that operate on a truly geological time scale. They began thousands of generations before you were born, and absent some major calamity, they will continue for thousands of generations after you die.

It’s easy to forget, because of countless movies and photos like these, that there is no light underground. The Ohio Caverns are wired up with artificial lamps, of course, but when they flip them off – as they did for a minute during our tour – you find out what absolute darkness looks like. Supposedly, enough time in the dark will atrophy your eye muscles, leaving you blind.

Back in 1925, they actually encouraged visitors to touch this stalagmite for good luck. That advice lasted only a year. It’s still filthy from the skin oils today.

Even with the artificial light, photos are tricky. Your flash goes off by default, but it washes out the picture and makes it ugly. So you have to disable the flash and hope for the best. These photos are the ones that turned out okay, culled from a herd of blurry rejects. 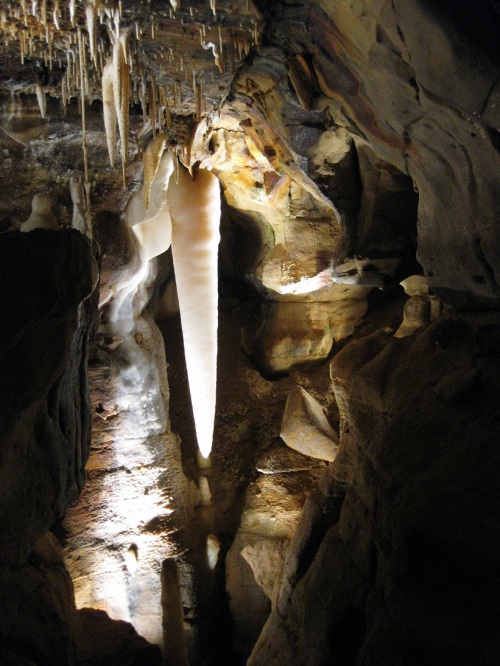 The Crystal King, the largest (and therefore, presumably, the oldest) stalactite in the caverns.

Of course, no tour is complete without a trip to the gift shop. This shop had a lot of stuff that wasn’t necessarily from the caverns themselves, but was still sort of cave-y or geological. For just $20, I snagged a trilobite:

The state fossil of Ohio, narrowly beating out write-in candidates “Can we even think of any other fossils?” and “Yo momma.”

Have you ever been in a cave?