Google and NASA are teaming up to launch the Quantum Artificial Intelligence Lab, which will explore the real-life possibilities of quantum computers. The model of quantum computer they bought is called the D-Wave Two, the same beast that Lockheed Martin snagged a while back. This stuff is sounding less like sci fi all the time. 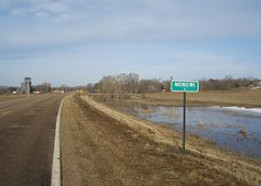 Welcome to Monowi, a village in Nebraska with only one resident. Said resident, Elsie Eiler, “acts as Mayor, granting herself a liquor license and paying taxes to herself.” Groovy.

Randall Munroe, a.k.a. the xkcd dude, explores this question: “When (if ever) did the Sun finally set on the British Empire?” It turns out, Pitcairn Island is a lot more important than anybody suspected.

Finally: another installment of the brilliant but underappreciated webcomic Nedroid. People, the character above is called “Beartato.” If you aren’t sold already, I don’t know what else I can say.

This concludes our weekly installment of Ways You Can Change Your Screen’s Pixel Arrangement By Clicking a Button on Your Mouse, brought to you by Sir Tim Berners-Lee. Have an outstanding weekend.