…And the people respond

A couple days ago, when I ranted about Trump’s horrible new immigration ban, I didn’t really expect a lot of people to care. I figured it would blow over like everything else.

I’ve never been happier to be wrong. 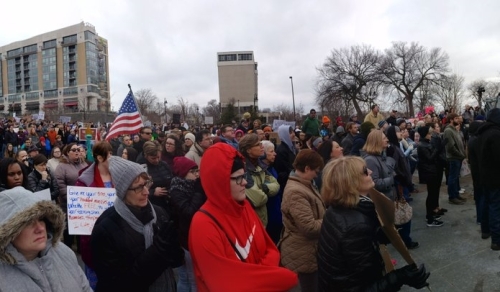 The judge’s ruling blocked part of the president’s actions, preventing the government from deporting some arrivals who found themselves ensnared by the presidential order. But it stopped short of letting them into the country or issuing a broader ruling on the constitutionality of Mr. Trump’s actions. […] Mr. Trump — in office just a week — found himself accused of constitutional and legal overreach by two Iraqi immigrants, defended by the American Civil Liberties Union. 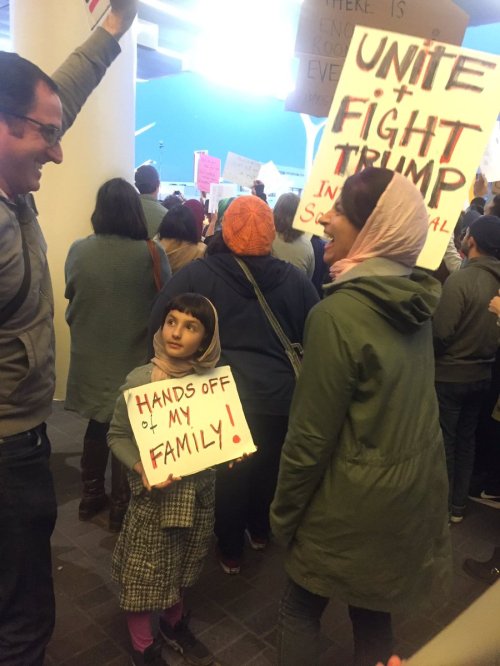 The ACLU said it has received more than 350,000 online donations totaling $24 million since Saturday morning. The non-profit organization that aims to protect individuals’ rights and liberties guaranteed in the Constitution typically raises about $4 million online in a year, according to Executive Director Anthony Romero. […] The ACLU now has 1 million members. Its membership has doubled since the election.

I don’t think the text quite does justice to this remarkable fact, so here’s a graph: 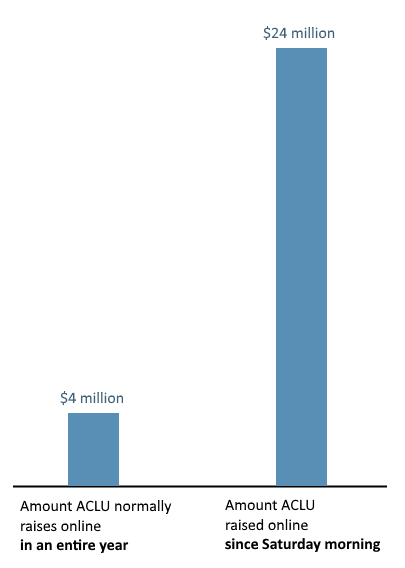 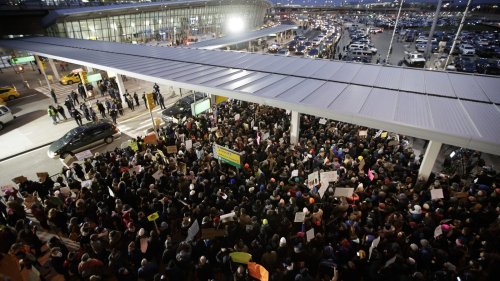 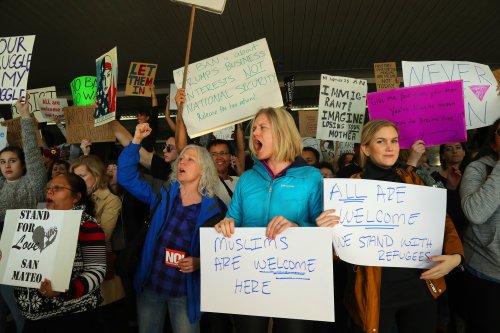 “Our government has a responsibility to defend our borders, but we must do so in a way that makes us safer and upholds all that is decent and exceptional about our nation. […] We should not stop green-card holders from returning to the country they call home. We should not stop those who have served as interpreters for our military and diplomats from seeking refuge in the country they risked their lives to help. And we should not turn our backs on those refugees who have been shown through extensive vetting to pose no demonstrable threat to our nation, and who have suffered unspeakable horrors, most of them women and children. Ultimately, we fear this executive order will become a self-inflicted wound in the fight against terrorism.”

“But I am opposed to a religious test. The courts are going to determine whether this is too broad.” 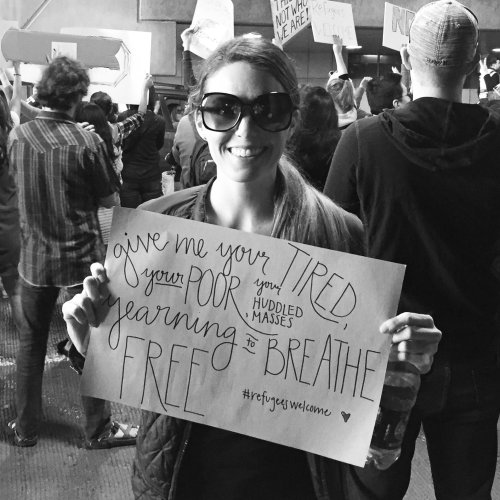 [Senators McCain and Graham] were not alone in their criticisms. Senator Bob Corker of Tennessee, the chairman of the Foreign Relations Committee, said that while he supported stronger screening, the order had been “poorly implemented.” […]

Senator Cory Gardner of Colorado, the chairman of the National Republican Senatorial Committee, likewise said the order was “overly broad” and that the blanket travel ban “goes to far.” Senator Lamar Alexander of Tennessee seemed to echo those criticisms, adding that “while not explicitly a religious test, it comes close to one, which is inconsistent with our American character.”

Senator Rob Portman, Republican of Ohio, went further, questioning the hastiness of the order’s rollout and calling for a re-evaluation of the White House’s unilateral effort. “In my view, we ought to all take a deep breath and come up with something that makes sense for our national security and again for this notion that America has always been a welcoming home for refugees and immigrants,” Mr. Portman said on CNN’s “State of the Union.”

Similar concerns were voiced by some Republicans in the House. Most prominent among them was Representative Michael McCaul, the chairman of the Homeland Security Committee, who said that “it was clear” that adjustments were needed to the order, but defended it in principle. Representative Will Hurd of Texas, a former undercover C.I.A. officer, called the measure “the ultimate display of mistrust” that would “erode our allies’ willingness to fight with us” and put Americans at risk. 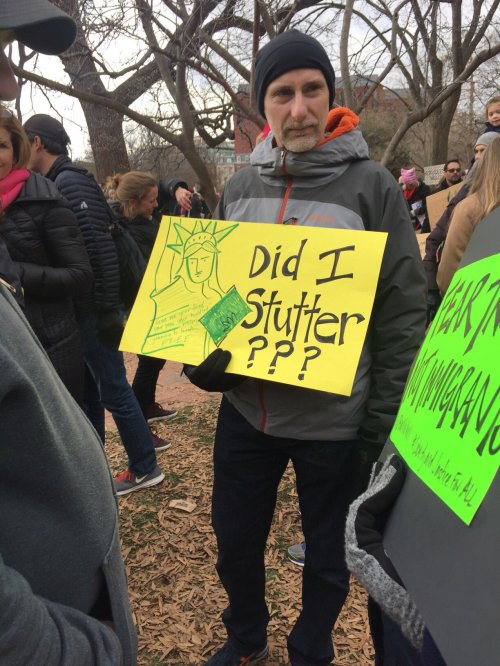 The White House pulled back on part of Mr. Trump’s temporary ban on visitors from seven countries by saying that it would not apply to those with green cards granting them permanent residence in the United States. By the end of the day, the Department of Homeland Security formally issued an order declaring legal residents exempt from the order. But the recalibration did little to reassure critics at home or abroad who saw the president’s order as a retreat from traditional American values.
[…] While Mr. Trump denied that his action focused on religion, the first iteration of his plan during his presidential campaign was framed as a temporary ban on all Muslim visitors. As late as Sunday morning, he made clear that his concern was for Christian refugees, and part of his order gives preferential treatment to Christians who try to enter the United States from majority-Muslim nations.
[…] Prime Minister Theresa May of Britain, who met with Mr. Trump in Washington on Friday and has sought to forge a friendship with him, initially declined to comment on the policy on Sunday when pressed by reporters during a stop in Turkey. But under pressure from opposition politicians, her spokesman later said the British government did “not agree with this kind of approach.” 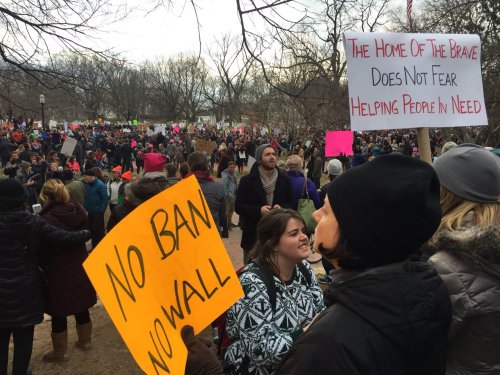 These countries [Saudi Arabia, Egypt, and the United Arab Emirates], unlike those subject to the ban, are ones where Donald Trump has done business. In Saudi Arabia, his most recent government financial disclosure revealed several limited liability Trump corporations. In Egypt, he had two Trump companies registered. In the United Arab Emirates, he had licensed his name to a Dubai golf resort and a luxury residential development and spa. Some of these entities have since been closed, and others remain active.

President Trump’s executive order on immigration is straining relations with the partner the United States needs most to reclaim the Islamic State’s stronghold in Mosul: the Iraqis. Iraqi officials were taken aback by the directive, which they learned about through the American news media because they had not been consulted first. 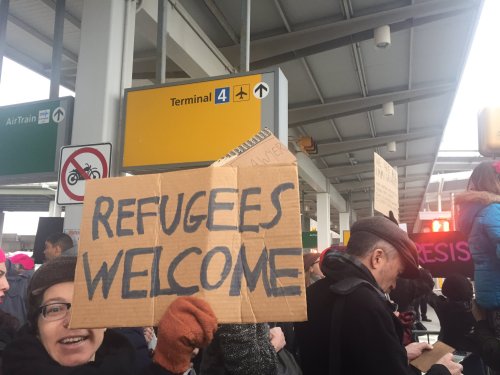 Gen. John F. Kelly, the secretary of Homeland Security, […] was still getting his first full briefing on the executive order when President Trump signed it. […] Jim Mattis, the new secretary of defense, did not see a final version of the order until Friday morning, only hours before Mr. Trump arrived to sign it at the Pentagon. 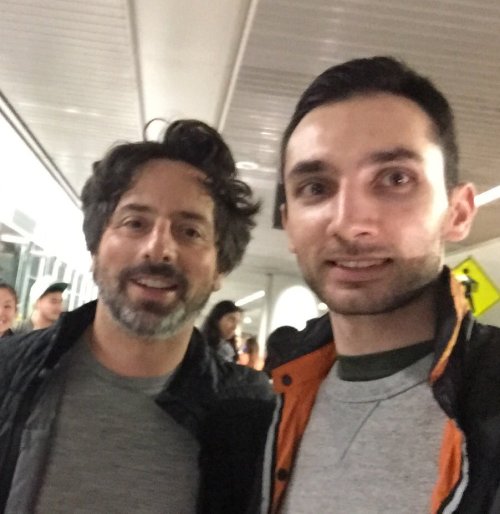 A man takes a selfie with Google co-founder Sergey Brin (left), who is an immigrant from the Soviet Union, at a recent protest.

The tech companies’ reaction was more forceful than that of other industries. Just about everyone in Silicon Valley came from somewhere else or is a son or daughter of someone who did or is married to someone who did. That list starts with the most famous Silicon Valley citizen of all: Steve Jobs, the Apple co-founder, whose biological father immigrated from Syria in 1954. […] Elon Musk, the chief executive of Tesla and SpaceX, who sits on two of Mr. Trump’s advisory committees, wrote on Twitter that the ban was “not the best way to address the country’s challenges.” Mr. Musk was born in South Africa. 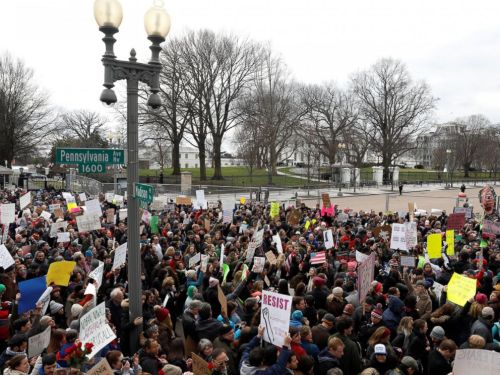 (If you’re interested, my thoughts on Bannon — from back during the campaign — may be found here.) 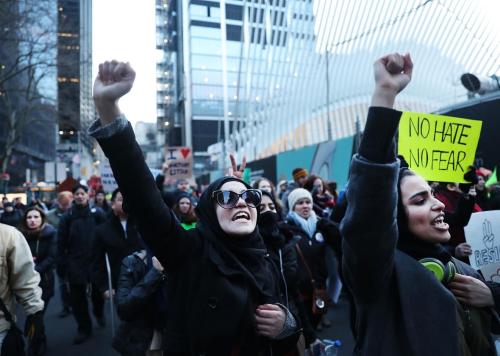 Meanwhile, in other news:

Petition for Trump’s tax returns gets record number of signatures

A WhiteHouse.gov petition demanding that President Trump release his personal income tax returns has broken the website’s record for signatures. As of 4:30 p.m. on Thursday, the petition had received 369,550 signatures. That’s close to 2,400 more than the previous record holder.

Once again, that petition is here. The number of signatures is now over 432,000 and still rising rapidly.

John McCain is harshly criticizing the elevation of White House strategist Steve Bannon to President Donald Trump’s National Security Council, calling the move “radical” because it minimizes the role of the chairman of the Joint Chiefs of Staff.

Because, you know, the former head of a racist, xenophobic Trump propaganda site didn’t have enough power already.

And finally, this sad and horrifying breaking news:

Multiple people were killed and others injured Sunday after gunmen opened fire on worshipers at a Quebec City mosque as evening prayers were ending in what Quebec’s premier described as an act of terrorism.

[…] The shooting is a particular shock for Quebec City, a quiet white-collar city with a low crime rate. In 2015, the city reported two murders. The metropolitan area has 800,000 people.

[…] Canada has seen increasing anti-Muslim hostility over the past year, but still nowhere near the level witnessed in the United States and Europe.

All this — the hatred, the ignorance, the hardening of hearts, the deadening of minds, the growing disregard for the truth — it has to stop. We have to stop it.