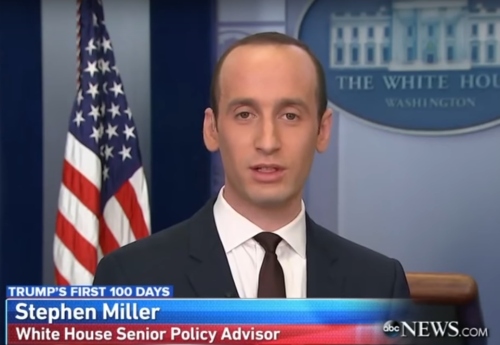 Stephen Miller is a senior adviser to President Trump. Lately, he’s been making the rounds on news shows, offering the official White House viewpoint on all sorts of issues.

I don’t think I can say much more about him without violating my “minimal profanity” rule, so I’ll just offer this excerpt from George Stephanopoulos’ February 12 interview.

I’ve taken the liberty of highlighting every sentence that contains the word “evidence,” since that’s really what the whole conversation is about.

STEPHANOPOULOS: Let me move on, though, to the question of voter fraud as well. President Trump again this week suggested in a meeting with senators that thousands of illegal voters were bused from Massachusetts to New Hampshire and that’s what caused his defeat in the state of New Hampshire, also the defeat of Senator Kelly Ayotte.

That has provoked a response from a member of the Federal Election Commission, Ellen Weintraub, who says, “I call upon the president to immediately share New Hampshire voter fraud evidence so that his allegations may be investigated promptly.”

Do you have that evidence?

MILLER: I have actually haven’t worked before on a campaign in New Hampshire. I can tell you that this issue of busing voters into New Hampshire is widely known by anyone who’s worked in New Hampshire politics. It’s very real. It’s very serious. This morning, on this show, is not the venue for me to lay out all the evidence.

STEPHANOPOULOS: You can’t make a — hold on a second. You just claimed again that there was illegal voting in New Hampshire, people bused in from the state of Massachusetts.

Do you have any evidence to back that up?

MILLER: I’m saying anybody — George, go to New Hampshire. Talk to anybody who has worked in politics there for a long time. Everybody is aware of the problem in New Hampshire with respect to —

STEPHANOPOULOS: Do you have any evidence?

MILLER: — issue — if this is an issue that interests you, then we can talk about it more in the future. And we now have our government is beginning to get stood up. But we have a Department of Justice and we have more officials.

An issue of voter fraud is something we’re going to be looking at very seriously and very hard.

But the reality is, is that we know for a fact, you have massive numbers of non-citizens registered to vote in this country. Nobody disputes that. And many, many highly qualified people, like Kris Kobach, the Kansas secretary of state, have looked deeply into this issue and have confirmed it to be true and have put together evidence [citation needed].

STEPHANOPOULOS: You have — you have —

STEPHANOPOULOS: — just for the record, you have provided absolutely no evidence. The president’s made a statement.

We should stop the presses. And as a country, we should be aghast about the fact that you have people who have no right to vote in this country, registered to vote, canceling out the franchise of lawful citizens of this country.

That’s the story we should be talking about. And I’m prepared to go on any show, anywhere, anytime, and repeat it and say the President of the United States is correct 100 percent.

STEPHANOPOULOS: You have provided zero evidence that the president’s claim that he would have won the general — the popular vote if 3 million to 5 million illegal immigrants hadn’t voted, zero evidence for either one of those claims.

STEPHANOPOULOS: Thanks a lot for joining us this morning.

And our country will create jobs, safety, prosperity and security, particularly for disenfranchised working people of every background, faith and ethnicity in this country.

STEPHANOPOULOS: You can start by providing evidence to back up your claims. Thanks for joining us this morning.