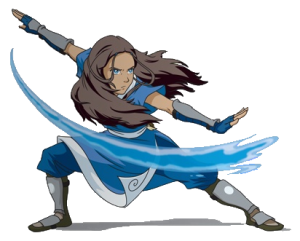 In general, when someone describes a movie or show as “fun for the whole family,” they are lying. You’re lucky to get “fun for children and boring for adults.” If you’re unlucky, you get “fun for nobody.”

Rare exceptions do exist: movies like The Lion King or Beauty and the Beast or Toy Story. Kids’ stories where your appreciation only deepens as an adult.

On such story is the three-season cartoon Avatar: The Last Airbender, which I finished recently. (Note: do not confuse with James Cameron’s Avatar or M. Night Shyamalan’s horrific The Last Airbender. The former is unrelated, and we like to pretend the latter never happened.)

The world of Avatar: The Last Airbender features the four ancient elements: Earth, Air, Fire, and Water. (Evidently molybdenum hadn’t been discovered yet.) For each element, there are people who can “bend” it. Earthbenders can send rocks flying through the air, firebenders can breathe flame, and so on.

The Avatar, a child named Aang, is the only one who can bend all four elements. The story of A:tLA centers on Aang and his friends as they defend the world from a power-hungry Fire Nation bent on conquering everyone.

It’s a cool idea, but as any writer knows, the idea is the easy part. The challenge is in the execution. Fortunately, that’s just where Avatar shines.

Like Babylon 5, another of my favorite shows, Avatar was conceived with a fixed arc from the beginning. The writers had a story to tell, and it had a definite start, middle, and end. This shows in the tightness of the plot, which moves along briskly and brims with foreshadowing.

The world-building is no less impressive. Each of the four elemental nations is based on a real-world culture. The Water Tribe, for instance, is modeled on the Inuit of North America. The Airbenders are reminiscent of Tibetan monks. Much of the world is based on Eastern philosophy, fashion, or lifestyle in one way or another.

But the characters are the heart of the show. Aang himself is a bundle of paradoxes: a ten-thousand-year-old child, a humble demigod, fun-loving but occasionally grim as death, the most kick-ass pacifist you’ll ever meet. Meanwhile a Water Tribe boy named Sokka, a non-bender, offers comic relief that’s actually funny while still being a believable character. Prince Zuko of the Fire Nation is as brooding and whiny as Hamlet, while his tea-loving uncle Iroh is simply one of the best characters in any show, ever.

And then there’s Katara.

She’s the girl waterbending in the picture above. Katara is an excellent character – strong, compassionate, decisive, vulnerable, fascinating. She’s a rare example of a female character done right, and in a kids’ show, no less. Too often, women and girls in media fall into one of two categories: passive love interest for the hero (like Padme in Episode III) or sexy kickass uberhero (like Black Widow in Avengers). Katara, amazingly, is a woman who is also a genuine human being. She has friends, but a mind of her own; she’s in love, but that’s not her defining trait; she’s strong, but she’s weak sometimes too.

I’ve written before that Star Wars, although I love it, is sexist. Avatar: The Last Airbender is not sexist, and that’s remarkable in itself. It doesn’t (usually) beat you over the head with its feminism. It’s simply an excellent show that happens not to be gender-biased. It’s one of the best things I’ve ever seen on TV.

This entry was posted in Uncategorized and tagged Avatar, Postmortem. Bookmark the permalink.