How To Write Korean Without Really Trying 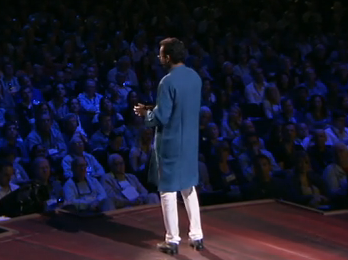 I watch a lot of TED talks, and this one by Ajit Narayanan got me thinking. It’s called “A Word Game to Communicate in Any Language.”

Let’s say you want to write an article, and you want it to be readable by the widest possible audience. The usual way would be to write it in English (or whatever your native language is) and have a team of translators type up copies for as many languages as they know. But this takes a lot of time and people, and you’re still probably going to miss out on the less popular languages.

Narayanan’s idea is radically different. He’s created an app that lets you pick symbols and draw relationships between them to express concepts in a language-independent way. For instance, if you want to say “The dog barks,” you’d tap the dog icon and connect it to the bark verb, and voila! A universal concept. This web of ideas can then be automatically translated into every language under the sun.

The AI geek in me loves the elegance of this idea, but I’m not sure it would work as advertised.

First, composing your universal article seems like it would take a lot longer than writing in English. You’d have to type a word, grab the symbol for it, put it into your idea-web, type another word, attach it with the correct relationship or verb, and so on. I don’t know about you, but that sounds like a pain to me, especially when your sentence is less like “The dog barks,” and more like “The outcome of this year’s summit on the effectiveness of economic sanctions remains to be seen.”

And finally, even if all that works correctly, what kind of writing would this generate? An automatic process to turn concepts into words seems like it would create dull, lifeless prose. This is already a huge issue in academia and bureaucracy. Do we really want to automate the problem?

But maybe this has more potential than I give it credit for. What do you think?

2 responses to “How To Write Korean Without Really Trying”