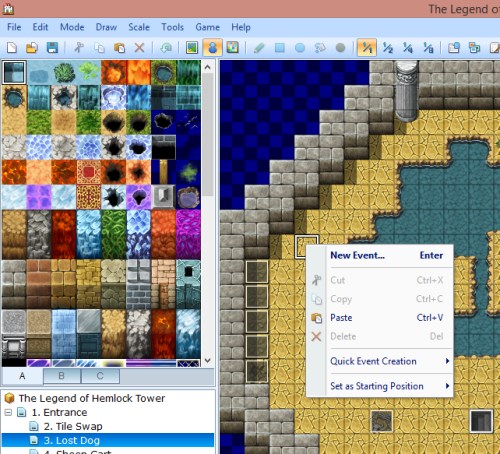 At the suggestion of one Ben Trube, I recently downloaded RPG Maker VX Ace, the latest and greatest in a long line of RPG Maker software that goes back to the late 80’s. It has a powerful, full-featured environment for creating – wait for it – RPGs. Not Rocket-Propelled Grenades, but Role-Playing Games, specifically tile-based games like Final Fantasy VI and its ilk.

RPG Maker is an interesting hybrid, self-described as “simple enough for a child, and powerful enough for a developer.” I’ve found this to be true for the most part. The built-in functionality covers most of the bases of a standard, straightforward RPG, with an impressive amount of content available right out of the box. But if you want to get into some more advanced options, you can write your own Ruby scripts, or download scripts that others have written. The more I play with RPG Maker, the more powerful it seems. I’ve been impressed with the scope of what I’ve been able to accomplish so far.

There’s also a vibrant online community full of resources and question-answerers. Want a script, tileset, or sound effect? It’s out there, often free. Stuck on a problem? Chances are, you won’t even have to ask, because someone else has already figured it out. It’s pretty great.

My own work-in-progress is a little game called The Legend of Hemlock Tower. As the name suggests, you climb higher and higher through a tower, with each room being a self-contained puzzle or adventure. It’s not really an RPG in the standard sense: there’s no XP, HP, or MP, no random battles, no equipment or anything like that. It’s really just an adventure/puzzle game. But it’s been fun to make, and based on the results of my friends’ playtesting last night, it seems fun to play as well.

I plan to make 100 floors, though I may cut that to 50 if it’s too ambitious. I have ten completed so far.

Anyone else out there tried making their own game? What was it like?

This entry was posted in Uncategorized and tagged RPG Maker. Bookmark the permalink.

7 responses to “Trying out RPG Maker”