Recently, I got this letter in the mail: 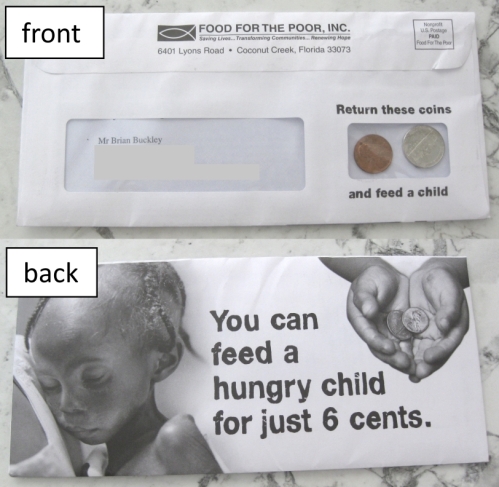 “Return these coins and feed a child.” The coins enclosed, a penny and a nickel, are real money. The charity is sending me some of their money – and asking that I send it right back. 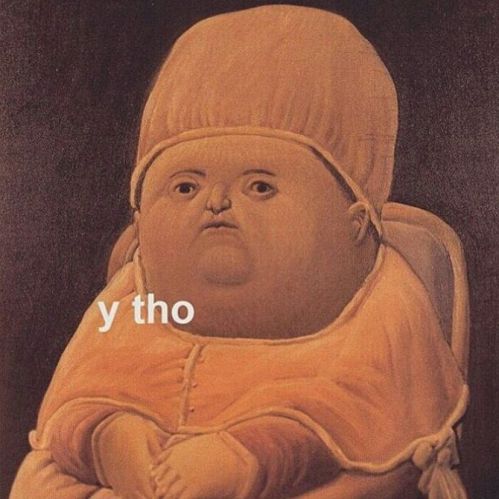 This particular letter came from a group called Food for the Poor, Inc. Putting aside the seemingly exploitative image on the back, let’s talk about the money-sending tactic.

I’ve seen this lots of times, from lots of different groups. Sometimes it’s a dime, sometimes it’s a postage stamp, but the idea is always the same. Here’s a little bit of money, so please send us back more of it.

Does anyone understand this? I’m really curious. It doesn’t make any sense to me at all.

Because let me tell you – and I’m speaking as a bona fide bleeding-heart liberal, here – I drop the coins in my coin jar, throw the letter away, and never feel the least twinge of guilt.

I’m a big believer in supporting charities, if they can reach their goals efficiently and effectively. I’m not one of those people who thinks that advertising, management, and other overhead expenses are “fluff” that should be as close to zero as possible. Just like for-profit businesses, nonprofits have a job to do, and they can’t afford to have any tool plucked from their toolkit.

But the tool has to make sense. And I haven’t yet found any sense in a charity sending money to me. Even at a superficial, emotional-appeal level, it doesn’t resonate. “These kids are desperate for food. Here we have the cost of a meal, and instead of buying food with it, we’ve sent it to you.” It isn’t just that I disagree with their argument – I don’t understand what it’s supposed to be in the first place.

Maybe I’m supposed to feel that they’re investing in me somehow, taking a risk on me, and I shouldn’t let them down. Is that it?

But an investment means that the recipient uses the money in some way. There’s a reason to send it. Here, they’re literally telling me to send it right back – at which point they will then take the money I sent back, and send it out to yet other potential donors, for reasons that are still not clear.

The thing is, this tactic is presumably working (or some marketing person is very misinformed), because I’ve been getting letters like this for years. So there must be people who do send the coins back. And, hey, it’s your money, do what you want.

I just don’t quite understand.

2 responses to “Charity Opposite Day”