I follow Trump on Twitter. (Generally I try to ignore internet trolls, but when one of them gets the nuclear codes, I figure we’re well past the “ignore” stage.) Reading this man’s tweets is bewildering, infuriating, disturbing, and hilarious, sometimes all at the same time. The word that keeps coming to mind is surreal.

On the plus side, he does offer an endless supply of what you might call “teachable moments.”

Consider the five-tweet barrage below, posted from 6:14 to 7:03 p.m. on November 28. The context here is that Trump claimed he would’ve won the popular vote if not for voter fraud on a massive scale — about 3 million fraudulent votes — and CNN journalist Jeff Zeleny pointed out that there’s zero evidence of that. (The sequence goes from bottom to top.) 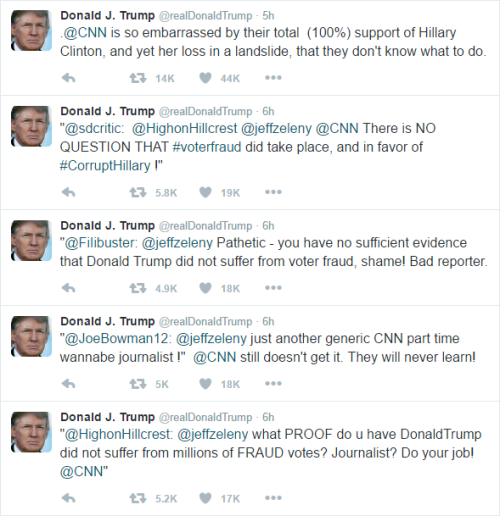 Of course this rant is childish, bizarre, and utterly unbefitting the President-elect of the United States. But let’s look a bit deeper. Let’s take this as a chance to learn about how logic works.

A logical fallacy is an argument that might seem sensible on the surface, but isn’t actually valid. Some are pretty obvious, while others are extremely subtle. Everyone uses logical fallacies sometimes, and everyone believes them sometimes, myself included. But if we can learn to recognize them, we get better at resisting their allure.

By my count, Trump has managed to fit at least 7 different types of logical fallacy into a span of 49 minutes. That’s one new type of fallacy every 7 minutes on average.

Appeal to ignorance (a.k.a., shifting the burden of proof) means declaring that something is true because we don’t know, or haven’t proven, that it’s false. He says, “you have no sufficient evidence that Donald Trump did not suffer from voter fraud.” But Trump is making a remarkable claim — that 3 million people voted fraudulently — so the burden is on him to prove it. There is no burden on anyone else to disprove such a claim.

This is closely related to the principle of Occam’s Razor, which says that you generally shouldn’t assume a complex explanation when a simple one works just as well. Since the simple explanation (no significant level of voter fraud) seems to work, Trump’s more complex claim (an elaborate scheme that went largely undetected) is the one that requires defense.

The funny thing here is that we actually do have good evidence that no such fraud took place. So even if Trump’s invalid logic were valid, it still wouldn’t prove his case.

“Ipse dixit” is Latin for “He himself said it.” It means that someone just asserts that something is true and expects it to be believed, either because they said it, or because someone else said it. Sometimes called an appeal to authority.

Trump says “There is NO QUESTION THAT #voterfraud did take place,” but he provides NO EVIDENCE THAT this is true. This is the kind of thing that happens in kindergarten a lot. “My dad could beat up your dad!” “Nuh-uh!” “Yeah-huh!”

By the way, appeal to authority isn’t inherently wrong. You can never use it as 100% proof of something, but if an expert on astronomy tells you something about how stars are formed, it’s reasonable to think that it’s probably true unless you have evidence to the contrary. But Trump is not an expert on how voting works (to put it mildly), so his opinion carries no weight, Caps Lock notwithstanding.

This means you attack your opponent directly, as opposed to attacking their argument. Insults are an example of ad hominem. Another one that’s popular in kindergarten. “You got this problem wrong.” “Oh yeah? Buttface!”

Trump has a lot of pratice with this. Here, his attacks on Zeleny include “shame! Bad reporter” (what is the guy, a dog?) and “part time wannabe journalist !”

Just what it sounds like. You fire up your audience’s emotions (anger, pride, fear, whatever works) in lieu of logic. Trump’s entire tweet sequence is aimed at making people feel a certain way, rather than think a certain way. Actually, I think that summarizes his campaign, too.

Of course, there’s nothing wrong with appealing to emotion in addition to using logic, and pretty much everybody does. It’s when you use emotion as a smokescreen that you run into problems.

Despite the name, this has nothing to do with DNA. Genetic fallacy means arguing that a claim is wrong because its source is untrustworthy or otherwise bad. Sort of a variation on ad hominem, I guess. Trump says: “just another generic CNN part time wannabe journalist ! @CNN still doesn’t get it. They will never learn!” The goal seems to be casting doubt on CNN’s claims by casting doubt on CNN generally.

The genetic fallacy can seem reasonable on the surface — after all, if someone’s not trustworthy, why should you trust them? Well, you shouldn’t, of course. But the point is that someone can be right even if they’re usually wrong. Even a pathological liar can tell the truth sometimes. (For instance, Trump recently said, “Happy Thanksgiving!” and he was right.) So even if CNN is totally full of crap, it’s still possible that they’re right about this particular argument.

This one is also just what it sounds like.

Whether or not you think CNN has a strong liberal bias, I’m gonna go out on a limb and say that their “total (100%) support of Hillary Clinton” is not a real thing that really happened.

Also known as the excluded middle. This means that you see the issue as black and white, all or nothing, one or the other. Like: “She’s not a saint, so she must be a criminal.” In reality, the truth can often be somewhere in between the two opposing arguments, or it can even go in a different direction entirely.

Of course, sometimes one side really is totally right, and here, the facts seem to vindicate CNN completely. But the point is that even if CNN’s claim is wrong, as Trump is saying, that doesn’t prove that his claim is right.

Listening to Trump speak can hurt your brain. But figuring out exactly why he’s wrong can be enlightening.

Also, I’m not sure Trump realizes he actually won the election. I mean, he’s attacking CNN because they’re upholding the validity of the process that will make him President.