The Chicago Manual of Style is to copyediting what Gray’s Anatomy is to medicine, what the Gospel of John is to Christianity: not the only textual authority, but one of the best known and most respected. Chicago is the kind of reference that proofreaders pull out to settle disputes, the kind of reference that can make even a seasoned editor say, “Huh. Guess I was wrong.”

To paraphrase Ron Burgundy: it’s kind of a big deal. For a certain flavor of geek, anyway.

When I started my editing career a few years ago, Chicago was on its 16th edition. At one point I read it cover to cover (well, mostly) and took careful notes. After all, I was brand-new to the field and had no formal training. I wanted to get it right.

In the course of my reading and note-taking, I came across section 5.220, which clarifies the usage of some commonly misused words. Among them were benevolence and beneficence:

You can click the screenshot to enlarge, but the gist is that beneficence is a tendency (in a person) to do good, whereas benevolence is the act of performing a good deed. Intention vs. action, in other words.

My prior understanding of these words was a bit fuzzy, so I had no reason to doubt the wisdom of Chicago. I did, however, notice something odd. A later entry states that maleficent means evil in deed, whereas malevolent means evil in mind. This is odd because you’d expect the “good” words and the “bad” words to be parallel; you’d expect -evolent and -eficent to mean the same thing in both. But they’re switched.

They all said the same thing: the “good” and “bad” words were, in fact, parallel, just as you’d expect. Chicago was wrong. They had gotten benevolence and beneficence mixed up.

I was stunned. And kind of excited. Had I really found an error in the big C?

After triple- and quadruple-checking that I was right, I finally sent them a note: 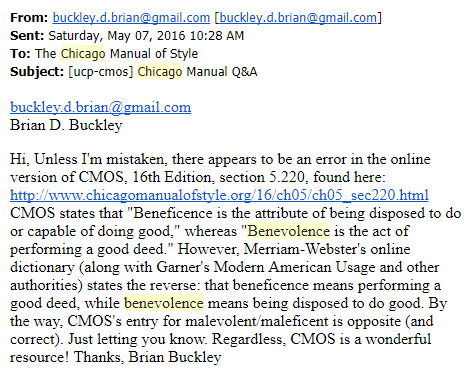 To be sure, it was better formatted when I sent it. The line breaks and such apparently got lost somewhere along the road.

Anyway, I awaited their response with bated (not baited) breath. And pretty soon, it arrived:

Now that’s what I’m talkin’ about.

Nothing new happened for a while. And then, about a month ago, a new (17th) edition of Chicago came out. And in the section on word usage (now renumbered as section 5.250) we find: 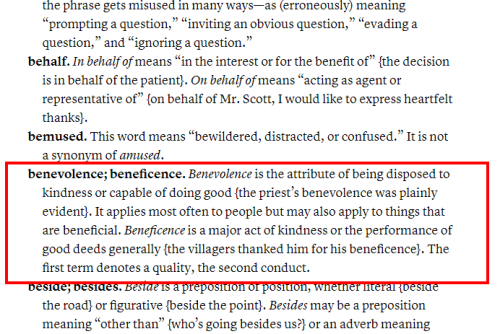 Taking pride in things like this is strange, because on the one hand, it’s really exciting, but on the other hand, the set of people who will be excited with you when you tell them the story is relatively small.

But y’all are pretty cool. I think you’ll pick up what I’m throwing down.

After all — that’s what the internet is for, right?