For a long time, I’ve thought it would be cool to know how to unicycle. Probably for the same reason I learned how to juggle: chicks dig it. (NOTE. This is not accurate.)

Last week, I was at the park (outside!) with a group of friends, and one of them brought a unicycle. He rode it around a little, and the rest of us tried to. To get an idea of our success rate, imagine a herd of antelope learning to touch-type, and that should get you pretty close. Still, I had fun, and was fascinated by this one-wheeled monstrosity.

I had to have one.

After doing a little research, I ordered this bad boy…and then waited. Yesterday, it arrived. 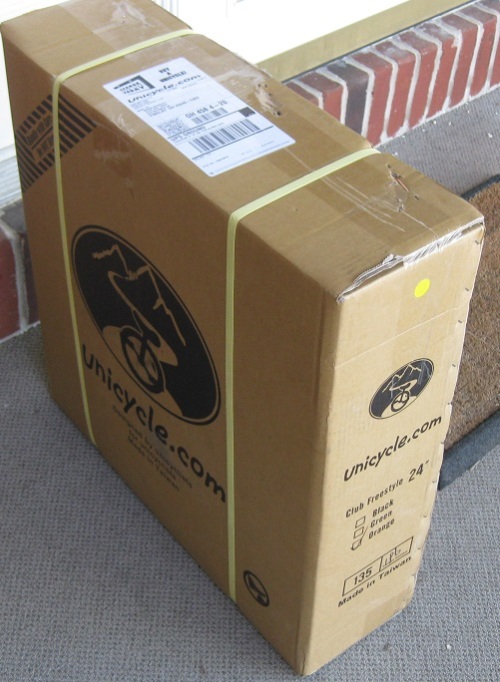 Not pictured: my neighbors pointing at me, saying “Why the hell is he photographing a cardboard box?”

Bubbly as a can of Faygo, I carted my prize to the back of the house to assemble it. 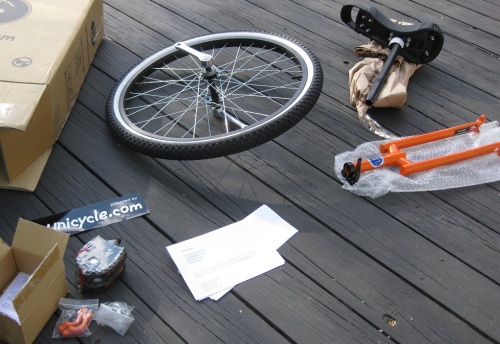 The instructions said it could be assembled in 15 minutes. Knowing my own technical expertise, I mentally adjusted this to “four days,” but in the end I was surprisingly successful. Using a couple of wrenches from my wife’s toolbox, and making a quick run to the local Speedway to inflate the tire, I got it together in about an hour.

And here she is:

Shown in the vertical orientation. In my experience, horizontal is more realistic.

If the seat seems pretty high up, it’s because I am freakishly tall.

Sadly I don’t have any pictures (yet) of me trying to ride it. Betsy was away at the time, and the list of Ways To Make Unicycle-Riding Easier does not include Trying To Take a Picture of Yourself While Doing It. But my method’s pretty simple: find something to lean against for stability (like a tree, or a bench) and get on the seat, pushing down on one pedal to steady yourself. Then put your other foot on the other pedal, find your balance, release your support, and go.

Experiments thus far have shown the “and go” step to be significantly more difficult than the others. I do in fact go, but the direction is mostly earthward.

It’s pretty clear, when you’re sitting on a unicycle, that this is not something God intended humans to ride. A little-known fact about unicycles is that they only have one wheel. When you’re watching someone else unicycling, it looks cool; when you’re trying to do it yourself, you wonder if you might be mildly retarded.

My friend said he never got hurt learning to unicycle. You fall a lot, he said, but since your instinct is to put out your feet, you generally don’t fall down.

This was, of course, a transparent lie. I had my first legit fall after about two dozen tries:

I admit this is not a very badass scratch. But give it time.

I love it anyway. Can’t wait to try it again tonight!

6 responses to “Brian Buys a Unicycle”